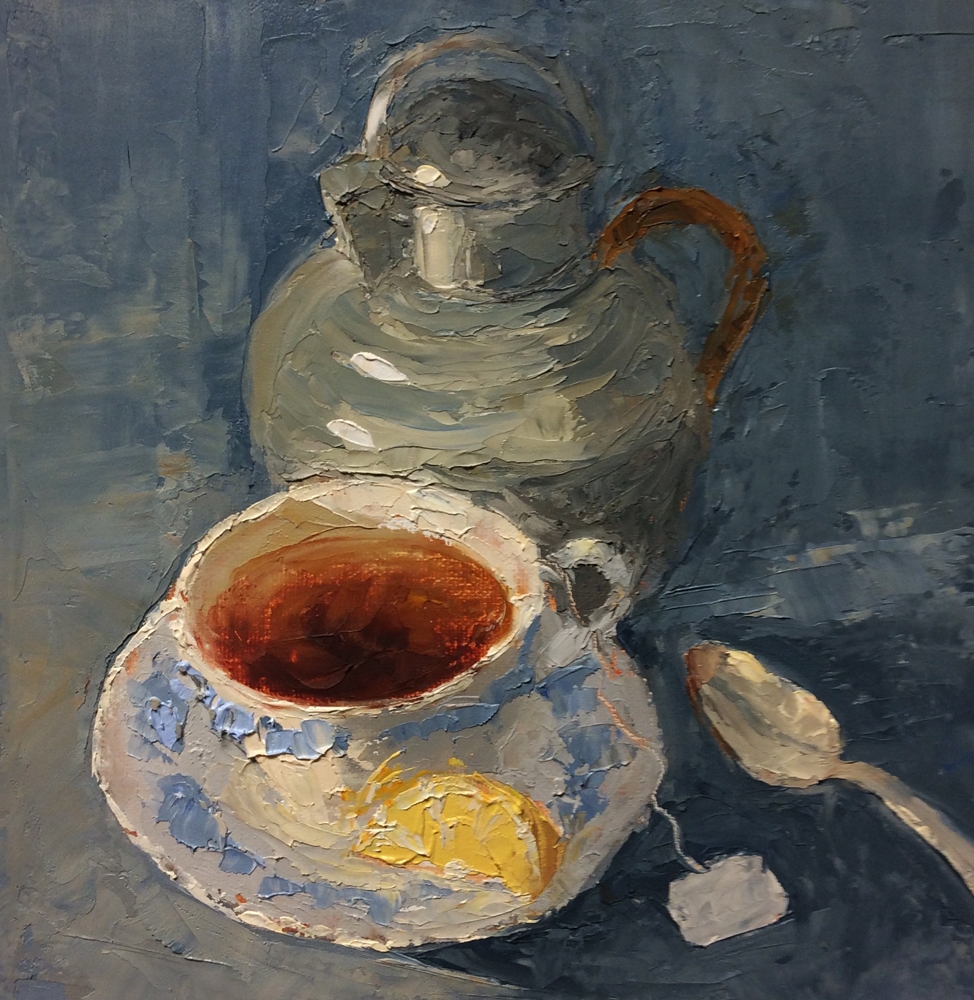 I can’t believe I’ve done it!  31 days of daily paintings.  I’ve learned a lot!  I’m also ready to get back to some bigger projects, but who knows I may come back to daily painting!

This teacup is a piece of Wedgewood that my Mom left me.  The pewter pitcher was one of her pieces as well.  Nostalgic to use these pieces in a piece of art. I’ve been wanting to paint this guy for awhile.  He’s one of the pieces I inherited from my Aunt Robin — who I was named after!  She was a very special lady!  Traveled all over the world, sang with the Robert Shaw Chorale, worked for Newsweek.  Way ahead of her time, she lived in Queens in NY by herself.  Once when I went to visit her we decided to meet at a musical in town.  She took the subway and I took a cab.  When we got there a crowd was gathered around a cabbie and an older gentleman in some sort of dispute.  Everyone was standing around watching the cabbie push on the old guy.  My aunt walked right into the middle of it and pushed them apart.

This Buddha statue was from one of her trips.  I have a studio in my home today because of her.  I moved her to Charlotte when she was struggling because of her age.  After living in some assisted living situations, we decided it would be great to have her at home with us.  I spent a lot of time with her anyway.  We designed my studio right next to her suite, so I could be available to her whenever she needed me.  Put in large hallways to accommodate her wheelchair.  Anyway, she passed before it was done.  But I think of her often when I’m in my studio and that part of our home.  Thank you Aunt Robin for letting me be a part of your life for your last years!  It was an honor and a privilege!!!

This painting was inspired by my friend Lesley Powell. http://www.lesleypowellart.com  She’s an incredible artist from Charlotte who does beautiful landscapes and still lifes.  She recently posted a painting she’s working on with a silver pitcher in it.  In my quest to find subject matter for this daily painting challenge, I realized I have one of those pitchers!  Yay – one more day resolved. It was fun!  I wavered between handling it with a brush or a knife, and compromised on a combination.

So another day down in my 30in30 Challenge and Strada Easel Challenge.  I’m learning lots and it’s a great way to get your head back into painting after the holidays!