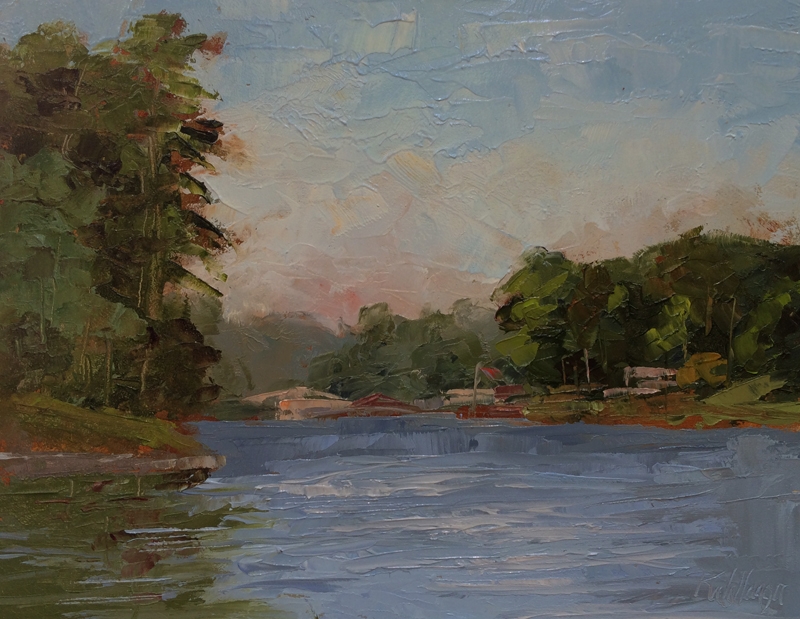 Had the lovely opportunity to do some plein air at Badin Lake this weekend.  Beautiful place, gorgeous weather.  Got to zone out for three hours painting! My favorite thing!!!  The top painting was done completely with palette knife.  I did block in with a brush of course.  Then I tried to very deliberately paint it from the back forward.  First laid in the sky, then the farthest view, then closer, etc. etc.  I’ve read recently that that is the best way to have success with the palette knife.  Not my style to be very deliberate!!

The next painting I changed the focus to the clouds, which were moving quickly!  So I can’t say that I painted them specifically.  Just tried to get their essence from observing.  This one I used my brush but tried to load it up with more paint than usual.  So much to learn with plein air!!I think I could have blued or grayed down the farthest scene to make it more successful.

All the best!  Happy painting! 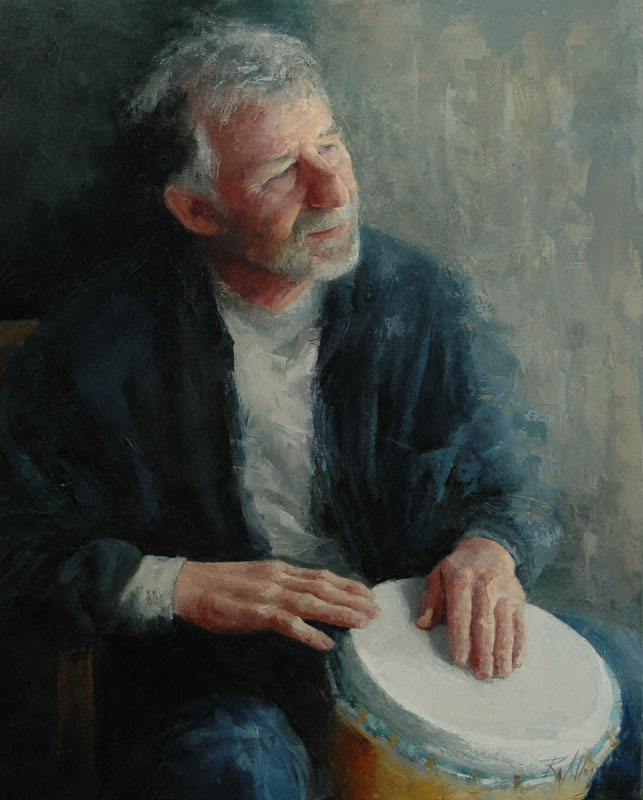 Finally posting this palette knife painting that I did of a dear friend, Mark.  It’s been at the Elder Gallery waiting for their June Salon Show of Carolina’s Got Art.  I am so pleased that it was accepted!  I’ve missed having it around.  Despite the fact that it was a labor of love, it was quite a challenge.  After incorporating palette knife into some of my plein air paintings, I decided to attempt one of a portrait.  First I did one of my daughter, from a photo.  I was excited about the possibilities.  I’m always trying to strike some balance between realism and pushing the edges to create a loose excitement in my paintings.

Along the way I decided to start a series of portraits of local Charlotte musicians.  My husband plays music with some folks and quite often they jam at our house.  I love the music and the musicians, so it was a compelling concept.  Mark was the first of that group.  And silly me, I decided to give the palette knife a try.  I blocked it in with a brush, but committed to the knife for the rest of the painting.  I found out along the way that it’s best to complete an area before moving on.  Once an area that has been knifed is dry, it’s very difficult to go back in.  As a result, I sanded out Mark’s face many times until I was satisfied.

I’m hoping to incorporate some audio in the final show.  If anyone knows where I can get a relatively inexpensive way to have a small audio player with each painting, I would so appreciate the information.  I’d love to have a snippet with each painting.  The gentleman in this painting has done some amazing spontaneous poetry in the middle of a blues jam!  Would love to share that with his painting!

Wish me luck with my palette knife portrait pursuit!  I’ll need it!  Hope to see you at the Elder Gallery on June 5th for the opening of Carolina’s Got Art Salon Show!  And hopefully at the show of my Charlotte Musicians!  All the best!!!!